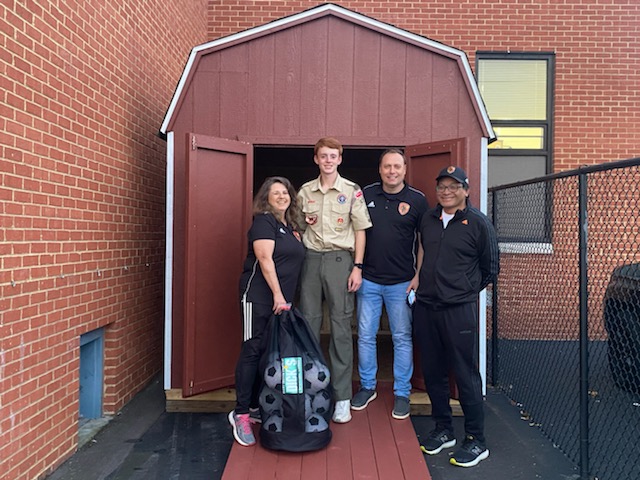 Cole Deaso has been a Sterling Soccer player since the age of 5.  He has grown with the program, participating in Goalie Training, Winter Training, Summer Camps and RefIT.  Cole is now a 14-year-old playing for Coach Dustin F. and can be regularly found on Hencken fields refereeing games for the club. Cole is also currently a 9th grader at Dominion High school and a Scout in Boy Scout Troop 673.

As Cole began to consider options for his Eagle Scout Project, he spoke to several community leaders and discussed all types of options.  While at recess one day at Seneca Ridge Middle School he noticed a problem.  Recess time was already limited, and often kids were waiting several minutes for the arrival of sports equipment to initiate play.  He found out that teachers were lugging equipment from inside of the school, in mesh bags only then to be distributed to students.  It was then that Cole made up his mind regarding decided his Eagle Scout project.

Working with Principle Nicholas Cottone and Assistant Principal Mitchell Seipt, Cole worked on a plan to build an 8x8 sports equipment shed for that would be colocated with the recess area. With the scope finalized, Cole began fundraising.  He sold Christmas Wreaths, delivered firewood, collected donations from local companies, initially raising over $2,000 for materials.  Unfortunately, COVID dramatically increased the cost of materials, requiring Cole to initiate a second round of fundraising.  He doubled down, raising another several hundred dollars and nearly another $1000 in material donations from Home Depot, Lowes, BeBold Sign Company and others.

Finally, over the course of several early mornings, late nights and weekends, Cole worked with over two dozen volunteers from the community to fully build and paint the shed.  But he didn't stop there and we are happy to announce that Cole solicited a donation from the Sterling Soccer Club and received a dozen soccer balls, a pump and storage bag to help, in Cole's words "Stuff the Shed".  Barakat Orthodontics also contributed to the effort.

As a part of the project, Cole personally recorded 112 hours and coordinated 171 hours from other volunteers.

Sterling Soccer:
During this project, we found out you had to delay your project, and then restart fundraising.  Tell us a little about that.

Cole: My original plan was to build the shed in July of 2021, but I had to delay it, because I underestimated the time required for planning and the cost of materials.  Fundraising was much harder than expected since wood prices almost doubled due to Covid.

Sterling Soccer:
Large projects like these always present challenges.  Is there anything you learned on the soccer field that helped you during the project?

Cole: When playing Soccer there are a lot of things to know, but communication, practice, teamwork, and leadership are consistently applied.  I used all of these skills during my project and it helped overcome challenges at every turn.  Communication was key to coordinating volunteers and working on donations.  Studying my playbook (plans for the shed) before the build day was really important.  It was like practice before the big game.  Working with the team and making sure everyone was working together and doing the right thing, at the right time really made the project go smoothly.

Cole: Some of my best memories were meeting some of my best friends, the memories from summer and winter camp, and my Dad coaching me every season.  Sterling Soccer gave me a place to play, but also a place to grow.